I saw this video of a mustache dance and I had to share. Can YOUR mustache do this? Image by Genista via FlickrGreat news coming out of the U.K.

Big C in Norfolk is behind a charity drive to raise money for people with cancer. The facial hair growing event begins in February. For details, check out "Grow a Beard for Charity".

Image via WikipediaFor some men, the chore of shaving can be a real chore. When facial hair enters the picture, fuhgetaboutit!

This article from Metro Male titled "Men's Grooming - How to Shave Properly" gives some great tips for an easy and effective shaving/grooming session.

Image via WikipediaStrange but true: celebrity beards are making the news!

First up, we have the hotly debated facial hair of Prince William. Those against the prince having whiskers can now breathe easy: returning from his Christmas break, his face was once again clean-shaven.

Next, we have the Pitt Goatee. Yes, the gossip has gone from pregnancy and Jenn/Angie wars to Brad’s facial hair.

Sir Tom Jones joined the likes of Hank Williams, Jr by using facial hair to cover scars, proving that facial hair is about more than an aversion to razors and shaving.

Several months ago, Sting’s gray beard was all over the news, including quotes about how much his wife enjoys his furry face. Some fans complained that the gray aged him, and now the news world is abuzz with talk of his newly dyed non-gray beard.

Speaking of singers and gray beards, Kanye West was none-too-happy when the February cover of US magazine featured a photo of him with a graying beard.

Finally, we have gossip magnet Spencer Pratt. Since his marriage to Heidi Montag one thing has changed for sure: he now is sporting a beard, apparently in a flesh-tone color (Though, it doesn’t look flesh-tone to me in photos).

Will all this buzz about beards begin a new trend in facial hair? Will facial hair become more acceptable in the work place, and will President Elect Obama suggest bailout funds for those, like himself, who cannot grow facial hair? We at the Greek Goddess of Men's Facial Hair certainly hope America and the world will come to embrace the furry face.

Image via WikipediaAn interesting article in the L.A. Times includes a morphing image display of all the presidents. Also included are some interesting tidbits about the trends with facial hair. For example, since 1914, there has not been a U.S. President with facial hair.

Mustaches in the New York Times

Image via WikipediaIn the Fashion and Style section of the New York Times is an article about the marvelous mustache. The article details the struggle of the mustache over the years and some of the famous faces it has graced. Most importantly, is the powerful explanation of why a man should grow a mustache.

If you have a few minutes and want a chuckle, be sure to check out this great article.

Image via WikipediaCurious about the world's longest beard? Wonder where the word 'mustache' comes from?

These interesting factoids and more are covered in the Facial Hair Trivia section of the Greek Goddess of Men's Facial Hair website.

Show off Your Facial Hair Image via WikipediaYou have fabulous facial hair. Why not show it off? Over on the Greek Goddess of Men's Facial Hair website, I have a photo gallery of handsome men and their amazing facial hair.

If you want to add your photo to the gallery, just send me an email using the email link in the sidebar. Be sure to include a link to your posted photo in any online album I can access.

Your photo will only be on display in the gallery, and if you change your mind, just let me know and I will remove it.

Mustache Humor – The Natural History of the Mustache Image via WikipediaIf you are into humorous reading, feast your eyes on this entertaining accounting of The Natural History of the Mustache by “Ed Page”.

This relatively quick read is an amusing story about the origins of the mustache that is sure to elicit a smile and a chuckle. Image by Laughing Squid via FlickrWhether its Prince William’s new look (with a beard) or President-Elect Obama’s inability to grow facial hair, politics and beards have been in the news lately. One example is in “The politics of beards” by Knute Berger.

When it comes to facial hair, what type of impression do you think it gives in the world of politics? President-Elect Obama professes an admiration of bearded president, Abraham Lincoln (with whom some compare him). If President-elect Obama could grow facial hair, do you think it would ruin his credibility – or do you think the fervor surrounding him would enable him to ‘get a pass’ on any negatives associated with facial hair?

Does facial hair make any difference to you in the world of politics? To some in the UK it does. To see a picture of the Prince with his beard and read an article questioning his ‘suitability to be king’ because of it, check out this article (with comments) in the Telegraph.

Looking for some facial hair related reading with fascinating pictures? Try Hair India: A Guide to the Bizarre Beards and Magnificent Moustaches of Hindustan by Chris Stowers and Richard McCallum.

A review of the book is available online at Ambassadors.net

In addition, a brief story about the book has been published in the Hindustan Times:

Another book featuring such fascinating facial hair is titled The World Beard and Moustache Championships: The First Official Book. The book was written by Michael Ames and illustrated by F. Stone Roberts. Published in 2005, this hardcover book is sure to entertain and possibly inspire. 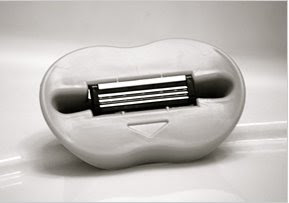 As promised, here is a review of the Swerve, from my teen’s usage of the product.

He found the Swerve easy to use in almost all areas of his neck and face, except around the jaw/ear area and the smile creases along the corners of his mouth. I am not sure it was intended for facial shaving/grooming, but he tried it, anyway.

He loved the design and maneuverability. He had to use his other razor to get the places that the Swerve couldn’t get, but overall, he found it to be a great product he would recommend. He said it made shaving a LOT (he stressed ‘lot’) easier and quicker for him.

The product is priced very reasonably, and the design is lightweight and ergonomic.

For more information about the Swerve, please check out the official product website at: http://www.theswerve.com/

Enjoy this Blog? Contributions to the Tip Jar are Always Appreciated

Please note that 20% of all proceeds from store sales go to charity (Locks of Love and Movember/Prostate Cancer Awareness). For more information on this, please see the Greek Goddess of Men's Facial Hair website.